Plasma cutting was originally developed for thermal cutting materials which were unsuitable for flame cutting, such as high-alloy steels or aluminum. Today, the process is also used for the economical cutting of thin, low-alloy steels.

One common definition of plasma is to describe it as "the fourth state of matter". We normally think of the three states of matter as solid, liquid, and gas. For the common element, water, these three states are ice, water, and steam. The difference between these states relates to their energy levels. When we add energy in the form of heat to ice, the ice melts and forms water. When we add more energy, into the water it vaporizes into hydrogen and oxygen,into steam. By adding more energy to steam, these gasses become ionized. This ionization process causes the gas to become electrically conductive. This electrically conductive, ionized gas is called plasma.

Southeastern Tool and Die operates a Messer High Definition plasma, capable of cutting up to 3" thick steel of various grades. 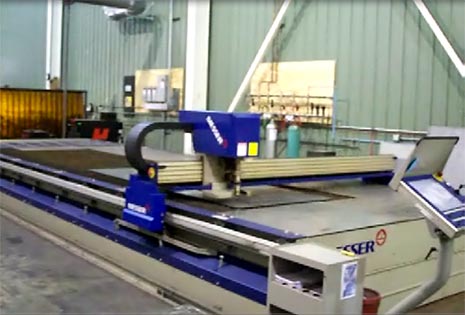